When is My Dog (and When Am I) Ready For an ORT?

In K9 Nose Work®, our dogs are almost always ready for the next challenge before we are, and that's definitely true in the case of the Odor Recognition Test, or ORT. An ORT is meant to be a test of your dog's ability to recognize one of the three target odors used in competition, and of your ability to recognize when your dog has found the target odor. The test is set up as a container search using twelve boxes, one box containing the target odor. While this all sounds simple, an ORT can prove to be unexpectedly difficult. Here are a few signs to look for that will help you know when you and your dog are ready to enter that upcoming ORT.

An odor obedient dog is one who actively searches for and goes to source odor. An ORT is made infinitely more difficult if your dog is not self-motivated to go to source odor. If the typical search for you and your dog involves you having to take your dog back to the source odor several times to get him to show interest and go to source, you're not yet ready for an ORT.

Make use of pairing the odor with food again to give your dog more time to make the connection that finding source odor is finding food. Keep searches simple so your dog has success without wandering or struggling. Once you move back to odor only, make sure to time your rewards properly to reinforce the desired behavior from your dog. Some dogs will alert to source odor, and if not rewarded quickly, they will begin exploring other ways of getting a reward (usually false alerting or fringing) and may not willingly return to the source odor.

As a handler, avoid cuing your dog during the search. Keep an even pace as the two of you work the search area and don't stop or linger at the hide location; keep moving until your dog has actually gone to source odor. This is especially important when practicing container searches. The scent from source odor contained in a box will sometimes fall on or in the nearest box or boxes, and this will cause many dogs to show strong interest in an empty box, sometimes even resulting in a dog alerting on an empty box. If you keep moving while your dog is investigating empty boxes - even if he alerts - he will eventually learn that the only way to get your attention and get his reward is to alert on source odor.

Keep your ratio of blind to non-blind searches low, say one blind search for every four or more non-blind searches. While blind searches are a way to test your readiness for an ORT or trial, they can also contribute to problems like fringing and false alerting. There's more value in strengthening your dog's understanding of what you want from him in a search (like described in the above paragraph) than there is in working blind and potentially supporting unwanted behavior. Too many times, I've seen a promising K9 Nose Work team rush to do a blind search only to have the dog fringe or false, and the handler reinforce the behavior through his body language - pretty much doing everything but rewarding the dog. The result is a handler who has less trust in his dog and is more likely to second-guess him in a search even when the dog is correct, causing further problems.

This is a good time to remind you to do blind searches with a CNWI/ANWI or a seasoned handler who can help you avoid any major missteps - like supporting a false alert - in the search.

If you can identify one or more things your dog does when he locates source odor, you're on the path to entering an ORT.

It turns out, there is a very easy solution to the problem of not being able to read your dog: patience. If you stick to well-timed rewards for your dog and continue to advance your training then you will begin to see the signs indicating your dog has found source odor. Many dogs begin with the "looks at me" alert, looking back to the handler for a reward after finding source odor.

Once your dog begins to offer some kind of alert at source odor, don't expect it every time. Remember that a timely reward is still most important to your dog. If you develop a habit of waiting your dog out for a desired behavior, you may end up with that behavior even when it's not desired. Build a chain of events that lead up to your dog sourcing odor - maybe he always stiffens up and does detailed sniffing right before he finds source odor, even if he doesn't do his "looks at me" alert. If you practice this way, then in a blind search you can use the behavior changes to get a pretty good idea of where the odor is even if your dog isn't alerting, as opposed to figuring out which of the five boxes he alerted to has the odor in it.

That part in the opening paragraph about ORTs being unexpectedly difficult, well, it's usually due to the pressure of searching blind and getting it right in an official setting. Performance anxiety. Sure, you and your dog only get one shot to call it right or you have to sign up for another ORT. Yes, you're likely to be at a new location in front of many unfamiliar faces (or worse, familiar faces you don't want to fail in front of), including officials and judges, and you'll have paid a nice chunk of change for the pleasure. No, there isn't really a way to completely eliminate that butterflies-in-the-stomach feeling that goes along with facing a challenge, outcome unknown. So, what can you do?

First, employ whatever relaxation techniques you care to try: meditation, yoga, acupuncture, soothing herbal tea, gregorian chant - be open to anything. If you can relax and keep your cool during a test like an ORT, your team will perform better.

If needles and monophonic monks don't lower your anxiety levels, then try practicing some searches in settings that raise your anxiety levels. Many K9 Nose Work teams fall apart in their first test or competition because the dog senses some major changes going on with the handler and reacts by shutting down or trying to please the handler, often with a false alert. The practice searches don't even necessarily have to be blind; you could do a demo for your son's kindergarten class or some coworkers, or make a bet with your husband offering him nights off from getting up with the baby for a week if you and your dog can't find the hide. The more exposure you give your dog to the various emotional states you might be in during a search, the better he'll cope when it really counts.

Ultimately, the best defense against competition nerves is experience. As your team's skills increase and you and your dog do ORTs and trials, it'll become easier to get into the right state of mind for a test or competition.


Still not sure when you should enter an ORT? Talk to your CNWI/ANWI and see if your class can do a mock ORT for practice. Your dog will most likely be ready and able to do an ORT long before you are, so when you do finally enter one don't forget to relax and trust your dog.

Happy Sniffing!
Posted by Jeff McMahon at 2:50 AM 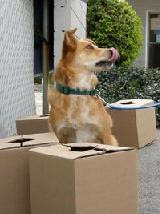